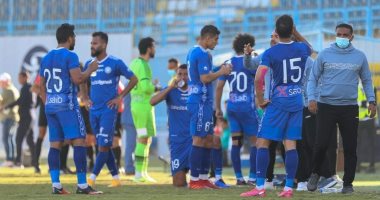 Today, Wednesday, the Aswan team and the technical staff, led by Alaa Abdel-Al, are subject to medical swab procedures to detect the Coronavirus, in preparation for the Zamalek match scheduled for next Saturday within the ninth round of the General League competition, which brings the two teams together at Petrosport Stadium, in implementation of the precautionary measures for Al Jabalia By undergoing a medical examination 72 hours before the match.

The technical staff of the Aswan team, led by Alaa Abdel-Al, closed the tie page against Ghazl El Mahalla, which brought the two teams together last Thursday at the latter's stadium, and ended with the two teams tied with a goal to the same, and the Aswan coach began preparing to meet Zamalek in the next round.

Alaa Abdel-Al confirmed that a draw with El Mahalla is a good start, adding that the technical staff faces great responsibility and physical and technical work that needs patience and determination, and Abdel-Al indicated that when the confidence of victory returns, the distinctive potential of the players will appear.

The Aswan coach added, that the most important thing that occupies the technical staff at the present time is the personal creation and style of play for the team, expressing his thanks to the management that seeks to support the team, stressing that the talk about staying and landing is early and exaggerated.

Aswan occupies the 13th place in the table of the general league competition, with 7 points, won by the people of the south after 7 rounds of the league, where they won two matches and lost in 4 consecutive meetings, before the former Aswan coach Sami El Shishini was dismissed and Alaa Abdel Al came, so that the sons of the south equaled In the first match with Abdel Aal in front of Ghazl El Mahalla.