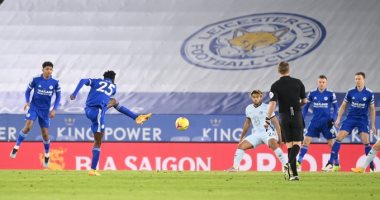 The Leicester City team achieved a brilliant 2-0 victory over Chelsea during the match that brought the two teams together Tuesday evening at King Power Stadium, in the nineteenth round of the Premier League's life in the Premier League, with the Foxes temporarily leading the competition table, ahead of Manchester United.

The first goal came after just 6 minutes, through Wilfred Ndidi, with a shot from the edge of the penalty area, and in the 41st minute James Madison scored the second goal for the landowners to end the first half 2-0 in favor of Leicester City, to end the match also with the same result.

Frank Lampard is the most manager of Chelsea, and the Blues scored goals in his reign, after receiving 50 goals after 29 games this season in all competitions, and the dismissal appears to await the Blues coach due to the decline in results.

With this result, Leicester is at the top of the Premier League table with 38, temporarily, one point ahead of runner-up Manchester United, 3 points ahead of Manchester City, the third, and 4 points behind Liverpool fourth, while Chelsea fell to eighth place with 29 points.