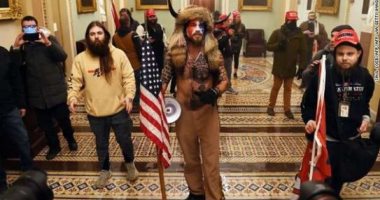 Two law enforcement sources said that the US Department of Justice is considering the possibility of bringing charges against members of far-right groups involved in the storming of the Capitol on January 6, under a federal law usually used against organized crime gangs.

The Organized Crime and Corrupt Organizations Act, known in short as (RICO), allows the prosecution to address specific organized crimes such as murder, kidnapping, extortion and money laundering, and the law enacted in 1970 stipulates severe penalties, including imprisonment for up to 20 years and confiscation of assets resulting from criminal acts.

The two sources, who are a current law enforcement official and a former official who left his post in the federal government recently, said that using the RICO law to prosecute those involved in the bloody violence witnessed by the Capitol is a matter that is being discussed inside the Ministry of Justice, but no final decision has yet been reached. The two sources spoke on the condition that their names not be published.

Five people, including a police officer, died as supporters of former President Donald Trump stormed the Capitol. The former federal official said that it was not clear whether the cases resulting from the incident met the "legal elements" needed to use the (Rico) law, adding, "This is a matter that is being discussed within the corridors of the Ministry of Justice."

President Joe Biden's administration has warned that domestic extremism is a growing threat in the wake of the storming of the Capitol, which contradicts Trump's vision of far-right groups such as the "Brow Boys" and "South Keepers".

Justice Ministry spokeswoman Christina Mastropascua declined to comment on the possible use of the RICO Act and referred to earlier statements by Michael Sherwin, chief of the Federal District Attorney's Office of the District of Columbia, in which he said he would prosecute the suspects according to the evidence.