Emad tired supports Walid Suleiman: A thousand peace be upon you, Taoist, and you will return better than the first 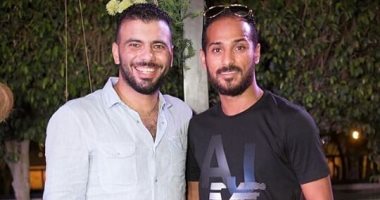 The star Emad Mutab was keen to support Al-Hawi Walid Suleiman, after suffering a rupture of the posterior muscle according to the results of the x-rays made by the player, and his absence from the FIFA Club World Cup, to be held in Qatar during the period from 4 to 11 February.

Mutab said, through his account on Twitter: "A thousand peace be upon you, Taoist, and, God willing, you will return better than the first."

Sayed Abdel Hafeez, director of football at Al-Ahly club, announced that Walid Suleiman, the midfielder of the team, had a rupture in the posterior muscle according to the results of the x-rays performed by the player, and Abdel Hafeez revealed that Walid Suleiman's absence will not be less than the next 4 weeks, and then his absence from participating with The team is in the FIFA Club World Cup scheduled in Qatar from 4 to 11 February.

Abdel Hafeez explained that Walid Suleiman will start implementing his rehabilitation and treatment program tomorrow, under the supervision of the team doctor.

Walid Suleiman suffered an injury in the last National Bank match in the Premier League, which caused his exit from the match, and Al-Ahly is preparing to face the Arab Contractors team, which is scheduled for five on Thursday evening, at Al-Ahly Stadium in Al-Salam, in the ninth round of the Premier League competition.