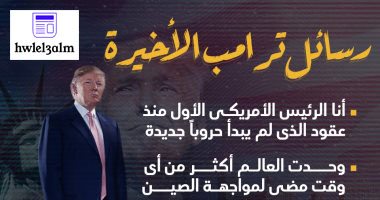 The outgoing US President, Donald Trump, in his recent speech, broadcast by the White House and describing it as a farewell speech, confirmed that he was praying for Joe Biden, although Trump repeatedly claimed (without evidence) that Biden won the election due to widespread fraud.

Trump said, "I am the first American president in decades who did not start new wars," adding that the world has united more than ever to confront China.

The outgoing president called on Americans to pray for the success of the Biden administration, noting that all Americans were terrified of the attack on Congress.