Juventus vs. Napoli .. Pirlo: The finals were designed to win, and we can claim the super 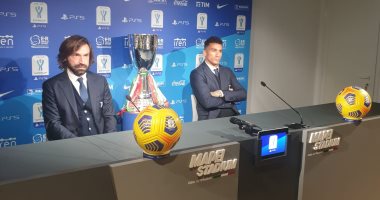 Andrea Pirlo, the coach of the Italian Juventus team, confirmed that Juventus is going through a difficult period recently, before the confrontation with his counterpart Napoli, at exactly ten in the evening, Wednesday, at the "Mabe" stadium in "Reggio Emilia", in the current version of the Cup. The Italian Super, Pirlo said in his statements to the official website of the Juventus club, "It is a difficult period as there is in any season, but we have a chance to catch the final and win the championship."

"The finals were made to win and we are here to win," Pirlo added. "We have to deal with absences. We missed Demiral and De Licht, but we have Kylini and Bonocchi as well."

"I got used to this situation. I feel sorry for the constant criticism of the players, especially the young players, they attacked me instead of them," Pirlo added, adding, "As soon as we go to the field, we look forward to replacing Sunday's match with what we will present."

"We want to send a message after the last match, and the next match will be our chance to do that," the Juventus coach added. "This team won the championship nine years in a row, this does not come with luck. We have the same determination to win the tenth."

On the other hand, Andrea Pirlo, coach of the Juventus team, lost his team against Inter Milan last Sunday evening, in the match that brought them together at the "Giuseppe Meazza" stadium, in the top of the matches of the eighteenth round of the Italian League "Calcio" the worst for Juve this season.

Andrea Pirlo said, in statements to the Italian "Sky Sport" channel after the match: "We did not step onto the field, we were afraid of the offensive play of Inter."

Pirlo added: "We focused only on defense, and we had no desire to attack. We allowed Inter to take the initiative and they became devastated in those circumstances."

And the Juventus coach added: "We were wrong from the start, and when you do not have the determination to win the matches, it becomes very difficult."

And he continued: "It is a bad defeat, we could not have played worse than this and it was unexpected, but we must raise our heads and prepare for Wednesday and the Super Cup against Napoli."

Andrea Pirlo said: "Our ambitions remain as they are in the competition for the Italian League."