A series of bombings in Afghanistan, killing 3 people and wounding 7 others 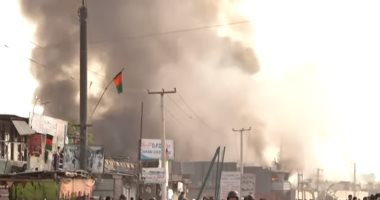 At least three were killed and seven wounded in a series of bombings in Afghanistan today, Tuesday, after Western countries called on the Taliban to end a wave of violence, for which the movement denied responsibility.

While Washington and NATO are reviewing plans to withdraw their forces from Afghanistan by May, an explosion occurred in Kabul targeting a four-wheel drive vehicle, killing two people, one of whom was Muhammad Atef, director of the non-governmental charitable organization Islah, according to the metropolitan police.

Two other explosions occurred in the city, which resulted in injuries and targeted a jeep belonging to the anti-narcotics force and a civilian one.

Zabihullah Mujahid, a Taliban spokesman, told Reuters that they had "nothing to do" with the Kabul bombings.

In the eastern city of Jalalabad, Ayatollah Khogyani, a spokesman for the governor of Nangarhar province, told Reuters that a soldier was killed and two wounded in an explosion targeting their car.

Another explosion occurred in the central province of Parwan, targeting a senior security official.

On Sunday, the European Union, NATO and several Western embassies said the Taliban were responsible for "most of this targeted violence."

They added in a statement that the movement’s attacks "undermine state institutions and contribute to creating an insecure environment in which terrorist and criminal groups can operate freely."

Peace talks between the Taliban and the Afghan government have stalled, and US President Joe Biden is reviewing an agreement to withdraw US forces by May.