Amr El-Ganaini: The Minister of Sports was surprised by the speech of our departure from Jabaliya 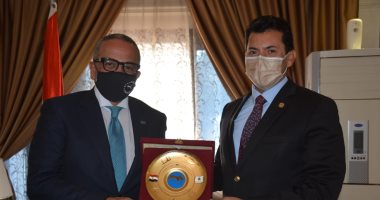 Amr Al-Ganaini, the former head of the five-year committee of the Football Association, confirmed that he was surprised by the speech of the International Federation of Football Association FIFA about our departure and the same thing to the Minister of Youth and Sports Ashraf Sobhi, and he did not know about this.

Al-Ganaini continued in his interview on Ontime Sport with the journalist Ahmed Schubert: "I knew that we were walking from the FIFA response that came to us, and it was a surprise of course. Even when I reached Ashraf Sobhi, I was surprised, and said that he will come to another committee." Al-Ganaini added, laughing, that the tripartite committee shall be appointed on January 31st, today, January 35, for Les Payne.

Amr Al-Ganaini said, during his interview with the journalist Ahmed Schubert on the "Ontime Stadium" program broadcast on the Ontime Sport channel: "I have been assigned by the state and the International Federation to undertake a difficult certain period, and it was a task and we did it to the fullest, and I do not see any opponents. We performed the task strongly, and I did not want to be in this place, but this is an assignment from the state and must be met, and I did not compliment anyone at the expense of someone, and I was only doing the right thing as I used to throughout my life. "

Amr Al-Ganaini added: "There was no disagreement between me and FIFA officials, and things were proceeding in a distinct manner. What happened to Mehmanesh? I was assigned a mission and I performed it and my mission ended and I did not want to run in the elections and I was a signatory to that."

Al-Ganaini explained: “Hany Abu Raida resigned from the Football Association, and we do not neglect his role in the International Federation, but the state spoke to me and he spoke to me after my choice and after what“ the seventh day ”published the news, and he may be the one who chose me, but I was informed by the state, but no My name, nor my history, allows me to be in a position and dictate from someone else, and all my decisions stem from my vision of things. "

Al-Ganaini added: The General Assembly of the Football Association wanted to feel free and listen to its views, and the general assembly that was established for the sake of the list was historic, and today, January 35, and the tripartite committee is a regular complement.