Al-Ahly agrees to loan Hamid, the goalkeeper of the Pharaohs' hand, to the Polish block 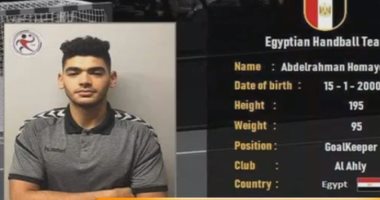 The Al-Ahly club agreed to the Polish club Wilson Block's request to borrow the goalkeeper of the Egyptian handball team Abdel-Rahman Hamid and the Al-Ahly club. Last.

Hand Union officials believe that the arrival of this offer promises to increase the number of professionals in the team before the 2021 Tokyo Olympics.

The handball federation headed by Hisham Nasr plans to hold a ceremony honoring the first team after the honorable performance of the World Championship Egypt 2021 and occupying seventh place by going out against Denmark by penalty shootouts in the quarter-finals.

The Egyptian national team was able to win the respect and appreciation of the world in the Handball World Cup, after losing to the Denmark team by a score of 39-38 after referring to the penalty kicks, after the match and overtime ended in a draw, at the Cairo stadium hall in the quarter-finals of the World Handball Championship.

The team presented a distinguished performance throughout the game, and embarrassed the Denmark team in front of the eyes of all observers of the world.