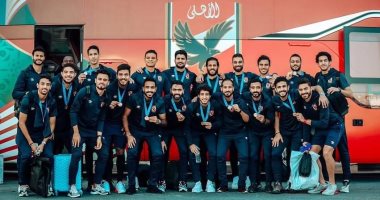 Al-Ahly club officials closed the file of the Sudanese Al-Merrikh match, which was held yesterday, Tuesday, in the first round of the group stage of the African Champions League, and ended with the victory of the Red Eagles with 3 goals, which took the top of their group.

Al-Ahly swept the Sudanese team, Al-Merrikh, with three goals, in the match currently held at Cairo International Stadium, in the opening of its campaign in the group stage of the African Champions League, which was crowned last season.

Musimani began focusing on the Simba game in Tanzania at the latter's stadium next week in the second round, as Al-Ahly decided to travel to Tanzania by private plane in order to face the Simba team in the second round, in which Al-Ahly is looking to achieve a good result in the journey to preserve the African Champions League title, which Al-Ahly won the version. The last one by beating Zamalek with two goals to one goal in the final of the century before the red genie won the bronze medal in the last FIFA Club World Cup in Qatar to repeat the 2006 achievement when he won the same medal.

Al-Ahly officials approached the extension of the left-back contract of the team on Maaloul for two seasons, as Betsu Musimani, the coach of Al-Ahly, asked to maintain the strength of the main team for the longest possible period, and from them on Maaloul, so Al-Ahly's management began the negotiation journey with the Tunisian star to extend his contract, and Maaloul's contract with Al-Ahly ends 2022, and club officials reached an agreement with him to extend until 2024 ends, and it will be officially signed within the coming days, and the last period has witnessed the extension of Al-Ahly management contracts for more than one player, led by Mohamed El-Shenawy, Ali Lotfi, Mohamed Sharif, Diang, and Akram Tawfik.