Chamber of Leather Industry: random import threatens 17,600 establishments, and we demand a meeting with the Minister of Industry 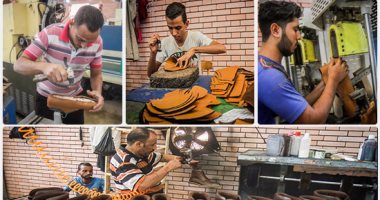 The Chamber of Leather Industry of the Federation of Industries called for an urgent meeting with Nevin Jameh, Minister of Industry, to solve the crisis of increasing random import, which threatens to stop 17,600 establishments in the footwear and leather products sector due to their inability to compete with these products that do not conform to standard specifications

Jamal Al-Samalouti, President of the Chamber of Leather Industry, said that the aim of the meeting with the Minister of Industry is to discuss the crisis of increasing imports and find quick solutions for it to protect the local industry and the consumer, stressing that the chamber has many proposals that contribute to solving the crisis from its roots.

Al-Samalouti demanded the inclusion of shoe faces (Alfondi) in the list of items subject to examination by the Export and Import Control Authority for factories that possess a needs card, stressing at the same time the need to tighten control over customs ports.

Tariq Bilal, Vice President of the Chamber of Leather Industry, said that the factories of shoes and leather products are currently operating at 20% due to the increase in imports and the outbreak of the Corona virus, which led to a significant decline in sales and an increase in the inventories of the manufacturers.

Bilal added that all shoes and leather products that are sold on the sidewalks are smuggled and do not conform to the specifications and harm the Egyptian consumer, calling for the necessity of increasing control over the markets to face this phenomenon.

The Vice President of the Leather Industry Chamber stated that the Chamber previously submitted a memorandum to the Minister of Industry to stop importing shoes, similar to the minister’s decision to stop importing ceramics for a period of 3 months, which came within the framework of the system of measures taken by the ministry to regulate the import of consumer goods during this phase, which is witnessing the outbreak of the Corona pandemic globally, stressing The necessity of equalizing the ceramic sector and stopping importation to save the local shoe and leather products industry, especially since Egypt has a production capacity sufficient for the local market, provided that the decision is reviewed periodically in accordance with what will happen in the next phase.

Osama El Toukhi, member of the Chamber of Leather Industry Board of Directors and head of the Leather Products Division, revealed that a number of importers have resorted to importing all shoe products from face, sole and brushes and collect them only in Egypt, and thus does not achieve any added value.

The Chamber of Leather Industry demanded, in a memorandum to the Minister of Industry, a number of solutions to curb smuggling and random import, including the need to tighten control over customs ports with the inclusion of customs officials within the security ambushes on public roads to verify that there are no cases of smuggling.

And she stressed the need to reconsider the exemptions for imports of the free zones and Port Said from the condition of examining the imported consignments to it, for example large quantities of shoes and leather goods that were previously re-exported to Port Said are smuggled out when they are rejected in terms of specifications, but they find their way again into the country through smuggling. The notice should also be tougher and the penalty for smuggling increased.

She called for the importance of the customs authorities investigating the validity of the origin data before the customs release, limiting the transit trade to tight containers with a closed ceiling and one to limit smuggling, and the necessity to oblige the importing companies to attach to the shipping documents a list of actual prices and to criminalize the importer who submits false invoices.

In the memorandum, the Chamber stressed the need for anti-smuggling agencies such as the General Administration of Crimes of Public Funds to follow up and examine the work of the extractors to verify the authenticity of the documents and customs release documents for the released letters, and to conduct subsequent follow-up on outlets selling leather products by examining the purchase invoices (retailer- Wholesaler - Importer) to ensure that the offered goods are released to customs in accordance with the rules governing importation and after payment of customs duties and value added tax on them in order to reduce smuggling.

The Chamber of Leather Industry demanded the necessity of obliging the customs outlets to estimate the value of imported consignments, guided by the indicative prices set by the Chamber for shoes and leather products.