Hariri: A government of specialists must be formed and not progress yet 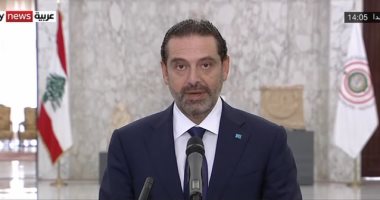 The Lebanese Prime Minister-designate Saad Hariri said in a speech to him, unless a government is formed from specialists, we will not obtain international support, continuous efforts to save Lebanon and stop the deterioration, a government of specialists must be formed and not progressed yet.

The Central Bank of Lebanon confirmed that the news circulated by some media outlets and social media about the fate and future of banks in Lebanon was untrue, indicating that these reports went to "conclusions" in which they spoke of bank merger and bankruptcy, incorrectly and completely disgraceful of the truth.

He added, "The Central Bank of Lebanon does not yet know which banks will implement the circular, and which banks are unable to do so." ... expressing his astonishment at the fact that some analysts anticipated the facts, and considered that there are those who want to thwart the decisions of the Central Bank in this regard.

The Lebanese banking sector is facing an unprecedented crisis in the country's history due to the financial, economic and monetary collapse that Lebanon is witnessing, in addition to the repercussions of high inflation rates, the collapse of the exchange rate of the lira against the US dollar, and the sharp decline in the monetary reserve in foreign currencies to about $ 18 billion.