Decreased shipments of corona vaccines from Pfizer and Moderna, in the United States 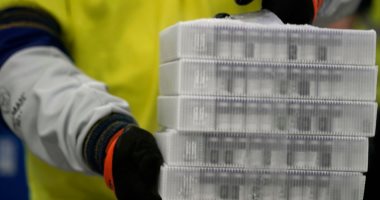 The US National Public Radio website stated that the United States of America is working on ordering more doses of the Corona vaccine to increase US supplies this summer, but before that happens, Pfizer and Pfizer and Moderna must fulfill their obligations under their original federal supply contracts.

Each company is responsible for supplying the United States government with 100 million doses of the vaccine by March 31, and although the two companies will need to significantly increase the number of weekly doses they release to the government to reach these goals, Moderna has made major progress in the past week.

The federal government allocated 5.8 million doses of Moderna to the states this week, according to the latest data from the Centers for Disease Control and Prevention.That's 1.5 million more doses than the 4.3 million the company provided the previous week - an increase of about 35%.

Meanwhile, Pfizer doses increased slightly compared to last week - 70,000 doses, or less than 2% - for a total of 4.4 million doses of vaccine this week.

"Yesterday, we announced a 16% increase in the flow of supplies into the states every week for the next three weeks to at least 10 million doses per week. That's good news," said Andy Slavitt, a White House adviser on the Corona response.

What he did not say, but is evident from the personalization data, is that most of the recent increase in supply has been due to additional Moderna doses.

"Pfizer and Moderna are committed to providing a total of 200 million doses by the end of March, most of them at the end of the quarter," Slavit said. "So it will accelerate."

This is important because if Moderna continues to release 5.8 million doses per week, it will only have released 85 million doses by the end of March.

And if Pfizer continues to release 4.4 million doses per week, it will have released only 72 million doses by the end of March. (This includes doses that have already been released as both vaccines were licensed by the Food and Drug Administration in December.)

The release of supplies to the federal government doesn't mean the doses are actually in the hands of federal officials but rather that the companies have informed the government that these are the first doses they'll give for the following week and the second doses they'll deliver a few weeks later.