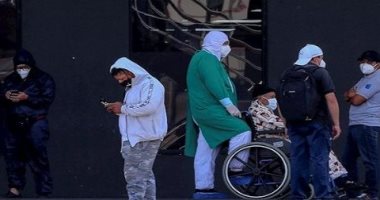 Ecuador is suffering from a deterioration in hospitals, and a collapse in the health infrastructure, as the Minister of Health in the municipality of Quito in Ecuador announced that 83 people waiting for a bed in the intensive care unit (ICU) in Quito hospitals suffer from Corona virus due to the hospital situation that the country suffers from.

The Venezuelan "Tele Sur" channel indicated that, according to official figures, the month of January closed with a total of 37,608 new cases, an increase of nearly 91% from December. In fact, January 2021 is the month in which the highest number of infections has been recorded in Ecuador since the epidemic began at the end of February 2020.

Epidemiologists in the region insist there will be an increase in infections, despite measures taken across the country to avoid crowding, public events and limited capacity in malls, cafes and restaurants.

Since last January, several cities in Ecuador have reverted to emergency plans to increase the spaces for Corona patients, due to the increase in cases and the expected increase.

This measure coincides with the end of the state of exception, ordered by the Ecuadorian government, after the Constitutional Court notified the unconstitutionality of Executive Decree 1217, according to which the exceptional measure was declared, due to a general disaster throughout the national territory.

The channel pointed out that the Ecuadorian authorities announced the discovery of an illegal medical center that had vaccinated tens of thousands of citizens with a fake vaccine in exchange for huge sums. The municipality of the capital Quito confirmed on its Twitter account the closure of an illegal hospital in a suburb of the city, noting that its workers were claiming Citizens will obtain full immunity from Corona after receiving three doses of this "vaccine."

The municipality stressed the need to prevent "such terrible things" from occurring, noting that the Ministry of Health is the only authority authorized to distribute vaccines against the coronavirus in the country.