Deschamps: sad about Tolisso's injury and his absence from the French national team 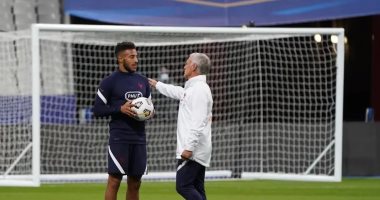 French coach Didier Deschamps expressed his deep sadness at the injury of Bayern Munich player Corentin Tolisso, after undergoing a surgery that will miss at least 3 months, which means that the player may be absent from participating in the European nations next summer.

Deschamps said in statements to the French Football Association website: "Corentin’s injury saddens me. There is no suitable time to be injured. It is still too early to say definitively about the length of his absence."

The French national team will play three matches in the 2022 World Cup qualifiers next March, on Wednesday 24, Ukraine will be hosted in the Stade de France, then it will face Kazakhstan on Sunday 28 March and then on Wednesday the 31st face Bosnia and Herzegovina.

Didier Deschamps will announce the list of players selected for these matches on Thursday 18 March.

Deschamps added: "What I am sure he knows about his great strength of character, we will see that he is at his best, I am sure that he will do everything for him."

In a related context, French reports said that French midfielder Corentin Tolisso and Bayern Munich underwent successful surgery on Friday, after suffering a tear in the left thigh muscles, while participating in Bayern Munich training.

The French newspaper "L'Equipe" said that Tolisso will miss the impact of that injury for at least three months, and therefore he is expected to miss the French national team during the Euro 2020 competitions.

She added: "Tolisso underwent hip surgery in Berlin because of a rupture of a tendon in the quadriceps muscle, an injury that should keep him off the field for about three months, and the surgery went well."

The thigh injury is a big blow to Corentin Tolisso, who has returned to a very high level with Bayern Munich in recent weeks, after recovering from an injury that struck him last November.

Tolisso sustained the injury while trying to hit the ball during Bayern Munich training without any contact with another player.